The club, freshly promoted to Ebac Northern League Division One, was on the look-out for a new sponsor over the summer – and family-owned Walter Thompson, based in the town for 100 years, answered the call.

The club’s chairman Jason Bleanch said: “We’re thrilled such a well-respected and established local company has agreed to be our main sponsor. I’ve known Walter Thompson’s MD Paul Hammerton for about 25 years and rang him directly when the opportunity arose.

“We lost our previous main sponsor over the summer because of the effects of Covid and lockdown. However, Walter Thompson were always high on our list to fill the void because we wanted a locally-based firm with a good reputation. I know community is as important to both Paul and Walter Thompson, as it is to us, so it’s a great fit.”

ONE of the region’s largest construction companies is celebrating after winning a top national award.

The gold award was given in recognition on the Breckon Hill Primary School project in Middlesbrough, where the company completed an extension and refurbishment project.

The annual CCS awards recognise the highest levels of consideration and care shown by constructors towards their local neighbourhoods, the general public, their workforce and the environment. This year’s awards were held online in light of Covid restrictions. 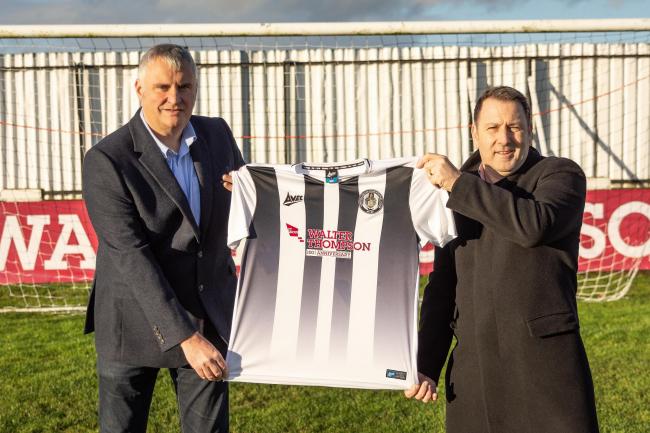 Jason has been chairman at the club for several months and has been on the club’s committee for two years. Over that short period there have been many hurdles, with the league once again paused due to current restrictions.

He added: “It’s initially a one-year deal that hopefully we can extend. Walter Thompson’s logo will be on our home and away shirts; they’ll get two big banners behind each goal and they’ll be acknowledged during match-day announcements, all our social media platforms and in our match-day programmes, currently e-magazines.”

The club is celebrating its 125th anniversary this year – while Walter Thompson marks a century in business.

Mr Hammerton said: “We’re proud of our roots and where we’re from and it’s a way of giving something back to the community in which we’ve been based for generations.”

Although the company was originally formed in 1920 it began trading in earnest after the Second World War, building new housing estates, hospitals, schools and office accommodation, predominantly in Northallerton and the surrounding area.

Walter Thompson soon gained a reputation as a quality family builder and became one of Northallerton’s major employers. The company merged with steel fabrication company Langtons in 1961 and then housebuilder and general contractor George Fordy & Son, of Teesside in 1987, establishing the FT Construction Group with Construction House, Northallerton as its base of operations.

Paul added “We’re a family company that’s been around since 1920 and we aim to keep growing steadily, providing jobs and livelihoods for our talented and committed workforce, while providing a first-class service to our valued clients.

“We are national award winners of the Considerate Constructors scheme and place great importance on supporting our local community, so sponsoring the local football team was an easy decision to make.”

The company has continued to work throughout the Covid pandemic, adhering to rigidly enforced Covid protocols, based on Government and Construction Leadership Council guidelines.

Walter Thompson’s Project Manager at the Breckon Hill project was Graham Cooper and the Senior Contracts Manager was Jason Henderson.

“Working in a live school environment is especially challenging from a Health and Safety standpoint, this is why we go above and beyond the recommended standards and work closely with the Considerate Constructors Scheme (CCS),” said Jason.

“This included safety presentations to the children about the dangers of construction sites and involved a visit from both Honor and Ivor Goodsite, the CCS mascots, to help get the message across to the children in a fun way. All our sites are audited by the CCS and given a score – Breckon Hill scored an excellent 44 out of 50,” he added.

The CCS monitor said of Walter Thompson’s project at Breckon Hill: “For its size, duration and location this is an exceptional site being managed professionally and considerately. In four of the areas under consideration (out of the five) the site has been judged as ‘exceptional.’”

The project at Breckon Hill involved building a new classroom extension, refurbishment works to a new commercial kitchen, new plant room, and an extension to the external playground areas.